We bought our Archambault Grand Surprise, called Samba, when she was 5 years old. After prurchasing the our new sailboat,  I decided to give her a quick hull cleaning and two additional layers of anti fouling. This is normally a two days job, as we see later it ended up being a 3 week job! More about Samba here.

To get the boat on the dry dock the boat yard we used a fork lift to reduce cost for BarcelonaSail.  The fork lift costs70 euro´s (100 US) per movement, and the 150T crane  costs 120 euro (170 US) a movement.  When the boat got out the water she looked not that bad, not too much green but at some places the anti fouling let go completely and the gel coat was visible.  That got me thinking. 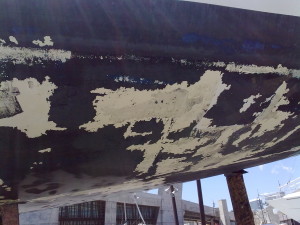 After cleaning Samba with the high pressure water, the anti fouling let go at many places and at some it remained.  “Not a problem said many people here in Spain, just paint over it, and put it back in the water”.  I love this boat and I did not feel it was right to paint over the existing anti fouling.

I decided to clean the boat completely and remove all of the anti fouling layers and start from scratch again. Now looking back on that decision, I am not sure I would do it again.

We decided to remove all the anti fouling layers, extending the job from two days to more than 10 days.  During the cleaning the keel, the fairing (filling) and the fiberglass bond between lead bulb and iron keel detached and we decided to remove it. The watertight connection was loose, apparently some fiberglass had got off the keel and bulb making its function obsolete.  After removing we saw the entire keel, the overall keel shape is beautiful, but the oxidation, although not excessive, needed attention. 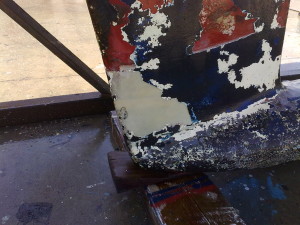 I contacted Archambault for help on these two topics and  was very disappointed with the advise and specific repair method. The reply was, “this is normal for a 5 year old boat and clean and repaint, place new fiberglass”. It did not explain the reason the what kind of paint to use.  I talked with local “specialists” here in Spain but did not find their ideas appealing. Not having a good idea how to treat the keel yet I continued sanding the hull. A job I would be doing for some days. 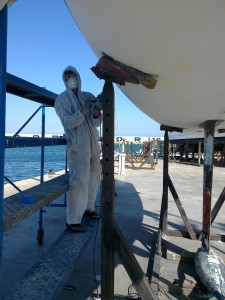 The cost of the dry dock is about 30 euro, 50 bucks a day and I started to get frustrated with the slow progress. Some people here in Spain place a gasoline based mix on the anti fouling, let it sit for 24 hours later, and then remove all the anti fouling layers. I heard the pros and cons and decided to continue sanding and in the mean time getting more information on keel repair and oxidation prevention methods.

Since I decided to remove all the anti fouling layers and do it really well, I sanded for days and days in the hot summer days of Barcelona around 30 degrees 95 f.   From experience now I advise to buy much more sanding paper than anticipated, and remove you old paper every 30 minutes saving you time and frustration.

I continued my research for a good answer for the keel oxidation, and met a Frenchmen who knew the sailboat very well and suggested the following: 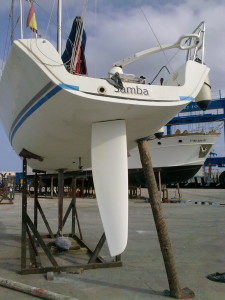 I was shocked: a total of 11 coatings! He explained the VC Tar2 is for the anti oxidation, it is an little used product because it is a two components coat and there are cheaper products claiming to do be similar efficient. VC Tar2 is recommended for keel oxidation and used as a prevention for osmosis.

First cleaning the keel and removing the rust. An 8 hour job easily.

After we made the decision to remove all the anti fouling layers and clean the boat to the original gelcoat we sanded and sanded for days. During day 5 the same Frenchmen came along and said, “well now you have cleaned the boat that much you might as well put the VC Tar2 on the hull as well to prevent future osmosis”. But the boat has no osmosis and is still very young I replied. He advised the VC Tar2 to be a be a great base for the next ten years.  Just sand a little more so that no more blue, the original coating, is visible.

I replaced the cutt-lass bearing as the original had  worn in a little. Removing the old bearing is challenge. First get disconnect the shaft. Archambault Grand Surprise has very little space to get to shaft. Laying there in the heat is no fun.  The we heated the bronze, placed ice at the bronze near the boats hull to the prevent the sikaflex from heating too much. With a few bangs the bearing came out. Cutting the bearing and then pulling it out is not recommended.

Later I removed the rudder which was an much easier process, just remember that the rudder is very heavy.

We decided to sand the our Archambault grand surprise to the original gel coat and we would apply four layers of VC tar2, a super two component base layer that would last for more than 5 years and protect the our Archambault GS against osmosis and keel oxidation. Our boat has no osmosis but we wanted to take care of our baby like a child and protect her from the filthy water in the Spanish harbors. 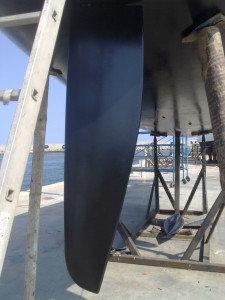 It was a pleasure to work with this material it sticks like no other material to the hull and keel. Obviously the VC tar2  two components is for some people an annoying factor you got to measure really well. The mixing ratio is 7 to1, it requires some effort to get that ratio correct. But the application is so easy, the boat looked like it was finished after this application. It dried quickly and at the end of day 7 we started with a new layer.

At the end of day seven our boat had a very beautiful slick black shiny color of the VC tar2. The keel get a total of 7 layers because the faring was gone during high pressure water treatment and so did the fiberglas at the bottom of the keel. I applied here and there some Wateright epoxy filler to fare the keel to its original state. But I was getting a little impatience did an average job.  Applying the quick dry West system 104 with fiberglass mats went so quickly that I had no time to make pictures. 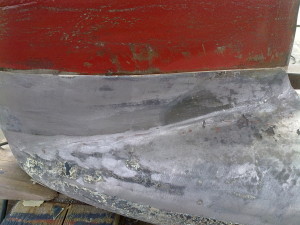 Luckily I had the help of some professionals because, that advised me on the speed with which it dries and gets really hot. I had it dried for 48 hours and put no pressure from the keel and boat on that part of the bulb.

The boat yard was sucking every euro out of my pocket every time I wanted to move the boat, they charged me 110 euros.  And I wanted all the parts to get the same amount of layers so I moved the boat 3 times, bye bye 330 bucks.  In Spain people paint quickly over the unpainted spots just before going back in the water and that is it. And I was frowned upon, people told me: “it is under the water no body sees it”.

Day 8 was relaxing, boat repairs include applying two layers of Primacon the interconnect between the base layer VC tar 2 and the final anti fouling layers.  We put the propeller blades for 24 hours in vinaigrette and it does a wonderful job. 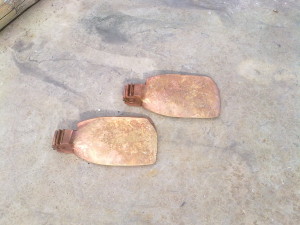 The paint just falls off, and with a brush you remove the latest remainders of the paint.  I could finally see the end coming but every time things were delayed. This day port people refused to move our boat on the weekend. They move boats 7 days a week but no boats that are under repair we learned. 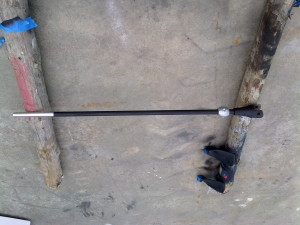 This added two additional days to our bill.  As we could not move the Archambault over the weekend we decided to take it easy. We painted the propeller blades and the shaft. Installed back on the boat and take the rudder of to remove some dirt between the rudder pin and the rudder block and put some grease. Everything like new again.

We painted the last remaining parts and enjoyed the last two days seeing improvements by the hours gives a good feeling. Tomorrow we go sailing again. That was sure. All with all the guys of the port were ok it was just a different experience for them working with a person who cares that much for the underwater part of the hull. Here a movie about the return to the water:  Samba back in the water